Democracy is alive and kicking in Berkeley. Berkeley has a long tradition of political activism, but it is also a place in the USA with limited political pluralism. More than 70% of its citizens vote for candidates of the Democratic Party. The choice is thus often between different shades of Democrats. Obama got 90% of the votes in 2012. Moreover the political activism is a bit tuned down by a rather lower turnout (at least in European terms). In the 2012 Presidential elections 73% of the registered voters showed up, compared with 81% in France that year. 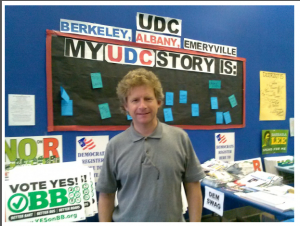 Local politics is the most vibrant part of American politics. This is partly explained by the size of the country. Washington is far away, and even Sacramento lacks visibility at the local level. Moreover when a citizen or family pays 1,3% Property Tax on the last transaction value of the home, the local level matters. I assume that for the house we rented the property tax was at least 6500 US Dollars. 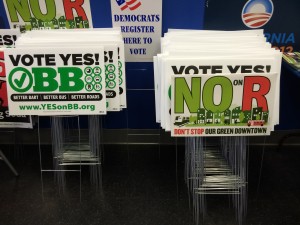 Since we pay taxes: do we want better biking and a green downtown

Elect the School Board

Property taxes pays for most of the services. Towns with high property taxes can fund good schools. In towns with low tax, or a low tax revenue public schools are of low quality and the wealthy bring their kids to private schools. So in the US you pay either a higher mortgage/rent and higher taxes for decent public services. Or you pay less tax, but then you have to find quality with private providers. But unlike in the Netherlands you may vote as a citizen for the control over some services. The officers in the Berkeley School Board are elected, and they each have a ticket and manifesto they want to be elected in. This is quite a favourable contrast for the non-accountable co-opted way school board members are appointed in the Netherlands. 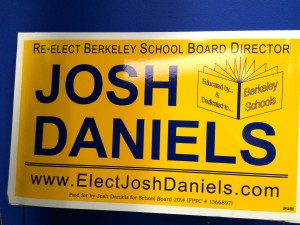 Candidate for the Berkeley School Board

The Referendum and Citizens Initiatives

What is also striking is the vast number of measures and initiatives that are put to a referendum to the citizens. In Berkeley the choice was at least: to improve the parks of the city, to invest in the bicycling infrastructure, to green the centre of the town and to increase sales tax on soda drinks. The last measure is surprising for a Dutchmen, where sales tax (BTW) is set at national level within a framework set by the EU. The soda tax is the most controversial on the ballot, but it has the benefit to be a conversation topic for everyone, from high school kids till their parents. 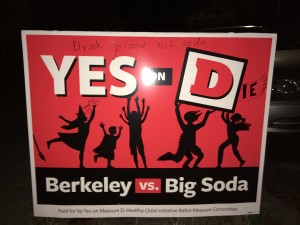 Referendum on tax on soda’s in Berkeley

The other odd proposal that has been promoted by some citizens and many businesses on the ballot is to divide Califormia in seven parts (each the size of Connecticut). Some then think that one of the groups wants to promote a session of a new state called Silicon Valley. This new state should encompass the whole SF Bay area. The thoughts of the proponents of a Free Silicon Valley have been analysed by Thijs Kleinpaste. This group also totally overlooks that Federal research funding and defines spending has made Silicon Valley as strong as it is. I strongly recommend Maria Mazzucato’s  analysis of the success of Silicon Valley, and in particular how Apple benefitted from Government funded research. 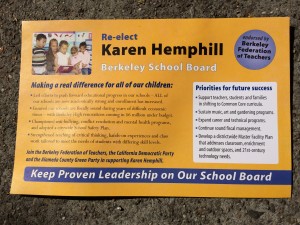 All politics are local

All politics is local, and involve an active involvement of grass roots. I walked into the Democrat Office were they coordinate canvassing actions. I told them that the Netherlands is taking over most USA campaign methods (except big money). The volunteer I spoke regretted that. Good debates to be able to make a well informed choice would be better than the onslaught of partisan campaign communication. This is something to think about. 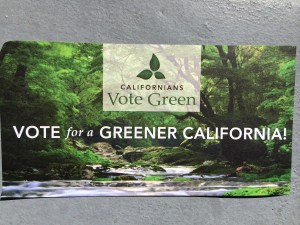 I would like to thank the people from Berkeley for their hospitality. I am grateful to the department of European Studies to invite me for a lecture. I thank the UC Berkeley department Comparative Literature and the teachers of Berkeley High School for the hospitality and support to my spouse and daughters.